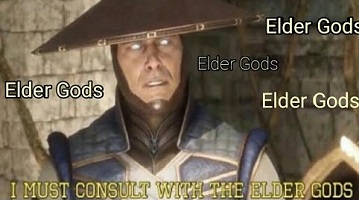 По-Михаиловски же!
"Step, and parry, and kick, and throw your hat. And spin, and spit and lunge for the nethers. Our fighting style isn't exactly formal, but it works."

тут предполагают что Added casually as fk, possibly gonna be "revealed" at the Game Awards along with something else

Fixed an issue causing several Krushing Blows to do slightly increased damage
Added an Newsletter Subscription option which rewards players with a Raiden Announcer Voice for signing up
Fixed an issue that was causing Nightwolf, Sindel, & Terminator Augments to not work as intended